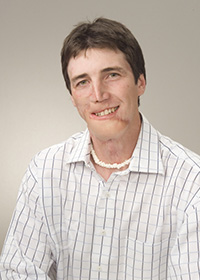 On July 29th, 1999,  Curtis was 17 years old and working  as a Construction Labourer on the prairies in Saskatchewan, Canada. After a long day at work, he and his crew were attempting to transport a grain bin under an overhead power line with their picker truck. Prior to performing the task, they had assessed the risk of moving the bin under the line and after a brief discussion they said it “had the potential to kill somebody”. They decided to go ahead with the task anyways. As they worked against the elements, Curtis steadied the bin from the high winds while they approached the overhead line. Then the predictable happened and the preventable happened. As they approached the overhead line, the operator of the crane did not boom down far enough and backed directly into the power line. Curtis immediately became the ground point for the electricity as 14,400 volts of electricity surged through his body three separate times. He was surrounded by steel and as each cycle of 14,400 volts passed through his body, the electricity tried to eject him from the live zone and violently threw him from one end of the steel structure to another as the 2nd and 3rd cycles of 14,400 volts of electricity passed through Curtis.  He was given a 0% chance of survival and his family was told to say their goodbyes. Instead, Curtis survived! Today, he has 3rd and 4th degree burns on over 60% of his body and is now a double amputee. Let Curtis share his inspiring story of  triumph over tragedy!

The Electrifying Truth about Staying Safe

Curtis conducts a comprehensive need assessment to tailor this presentation for each client. Curtis also works with employers to incorporate any key messaging that employer may have in place within their organization, re-enforcing company cultures and messages. Curtis works from his views that in order to change or develop a safety culture, first we must change or influence human behaviour. This presentation offers the tools needed to make these changes, with hazard assessment, risk analysis, and a joint-accountability approach to safety management and prevention. Above all, Curtis emphasizes that we must remain accountable to ourselves.

“I think of myself as a successful person. But I can tell you that you made me humble.” Tom – Thyssen Mining

Wow! About as an engaging and impactful presentation as I have ever seen.” Brad – Canadian Vocational Rehab Conference

“The crews had more feedback after this meeting than ever before. I would like to have Curtis attend all our section meetings, as the impact on this one was so great.” Bev – Ministry of Highways